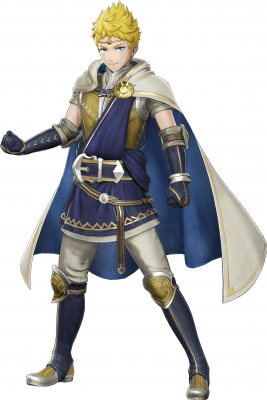 "A hero from the world of Fire Emblem Warriors. As prince of Aytolis, he seeks with his twin sister to use the Shield of Flames to stop the Chaos Dragon. He can be brash, but he has the strength and can-do attitude to pull through any situation. His father died when he was young, so now he longs to be a knight. He uses sword techniques inherited from both Aytolis and Gristonne--and wields his shield equally as well. He excels at knocking back his enemies."

Rowan will jump straight upwards while doing a spinning slash.

Rowan will throw his shield around him, creating a ring of light around him. Eight small swords of light will appear on the ring. Once Rowan raises his sword hand, the eight light swords will fire outward, damaging enemies and revealing stun gauges for commanders.

Rowan will quickly thrust several times, then do an upward rising slash.

Rowan will charge his sword with light, then do an upwards slash, two diagonal slashes creating an "X", and finish with a clockwise semi-circle slash.