Fate or Bonds is the first chapter encountered in Fire Emblem Awakening. It is designated as an Intermission chapter, the first of its kind in the series. As its designation suggests, this chapter takes place outside the natural progression of the story, at a time unknown to new players.

Upon completion of the chapter, no data from this chapter is carried over and the player properly begins the game in Prologue: New History. 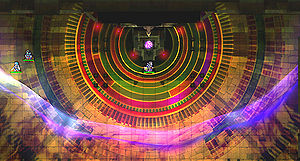 Chrom and Avatar are the only playable characters on the map. The only enemy unit on the map is Fauder, the Plegian Sorcerer, and the chapter ends after Fauder is defeated.

Fauder does not move, so players must move Chrom and Avatar to Fauder's location. Unlike other enemies, Fauder's stats do not change depending on the difficulty level, although on Lunatic mode, his Tome rank is raised from B to A, increasing his Might by 1.