This is a list of some Fire Emblem references and cameos in popular culture. 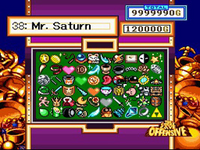 The Falchion made a cameo in the Great Cave Offensive.

"There's this one game that just absolutely rules. It's called "Fire Emblem"..." - Young Toad raves about Fire Emblem to Mario 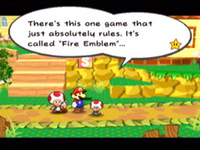 In Petal Meadows village, there is a young Toad that you can talk to you and he says that his favorite video game is "Fire Emblem" (referring to The Blazing Blade). Paper Mario was also developed by Intelligent Systems.

The "Fire Emblem" opera theme from the Dark Dragon and Sword of Light and Binding Blade commercials featured in the Japan-only Donkey Konga 3.

The "Fire Emblem" track in the game includes Dark Dragon and Sword of Light's Theme and Map ~ Player Attack in the song. 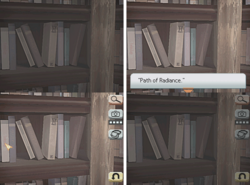 The "Path of Radiance" book in Trace Memory.

In the Golden Bird Room, before you pick up the E Book, the leftmost book is called "Path of Radiance", a reference to Path of Radiance on the GameCube.

Archanea (a nation that first appeared in Dark Dragon and Sword of Light) was referred by Princess Piazza when she crafts a lie to get onto Trantian's giant wooden horse, while heading for Troy:

The level up music from Dark Dragon and Sword of Light and Fire Emblem Gaiden was used in Metal Combat: Falcon's Revenge (which was also developed by Intelligent Systems). 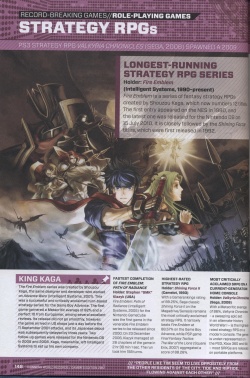 The book of Guinness World Records 2012 Gamer's Edition has a Fire Emblem reference in Page 148 in the RPG section and it shows the Box Artwork of Path of Radiance and it shows the info about the Fire Emblem series and it was marked the Fire Emblem series as the Longest-Running Strategy RPG series in their Records. Also, they marked it in the 2012 Gamer's Edition as Twelve Games that were released instead of Eleven Games and it also surprisingly that they marked as Heroes of Light and Shadow as the latest game around in 2012, since Guinness World Records have seen Heroes of Light and Shadow was released in Japan and it wasn't released outside of Japan since it did showed their info in the book as "The latest one was released for the Nintendo DS on July 10th, 2010.", which its strange that they didn't include Fire Emblem Awakening in the 2012 Gamer's Edition, that the game was released in Japan in April 19th, 2012 and it was announced outside of Japan around Late 2012 before it was released in US around February 4th, 2013.

Fae is a character representing Fire Emblem in the manga and anime World War Blue, a reimaging of the console wars between Nintendo and Sega.

The Fire Emblem series by Professor Mushroom is also mentioned in the FAQ in Part 2, Chapter 1: Green Hill on Volume 2.

In the official comic section from the Penny Arcade's official website featured a mini comic called "Friends With Menefits" that features the references from Fire Emblem Awakening. It have a references of the Support Game Play and two playable characters: Chrom and Frederick. But, the guy in the motorcycle helmet claims that he did get a S Support for Chrom and Frederick together and he can't get them to married each other.

Note: In Fire Emblem Awakening, the player cannot get a S support between with two male units, the S support only allows if some of the Male Unit and Female Units to get married. This is kinda more like a joke in the comic.