This page was last fully updated on: 20/04/2019 (mini update Jan. 2020)
If you are looking for information on what kind of Fire Emblem 0 (Cipher) products are available, where to buy them or need certain specific knowledge about certain events, visit this page.
If you're looking for a video guide on Rules on how to play Cipher, check out DifferentFight's video here or Cipherfaire's videos here and updated version.

In Fire Emblem 0 (Cipher), two players go in a turn-based battle between their Main Characters (MC for short, also known as a Lord). Each deck must at least contain 50 cards, including a player's Main Character (there is no upper deck limit, so you can have any number of cards in your deck as long as you have at least 50 cards). A deck consists of numerous different characters and the Symbol(s) that they play (there’s no limit to the amount of symbols that can be played either). Characters can have many different Affinities, from the kind of Weapon they use, what gender they are, or the specific type of unit they are (this is explained later). Simply, you win by defeating your opponent’s MC while they have no cards in their Orb Zone (will be explained in more detail later on).

What exactly is on a Fire Emblem 0 card? 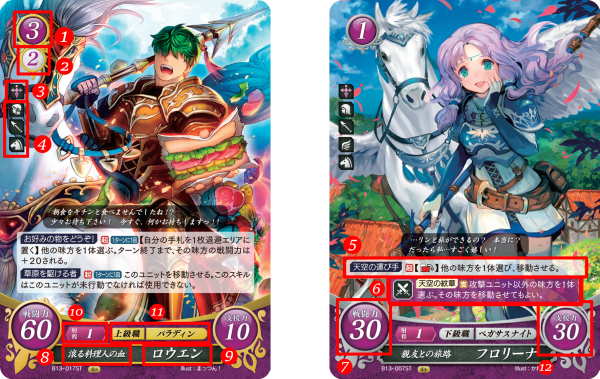 Each unit has a set of skill(s) that determines what that unit is able to do. There are currently six different types of skills in the game, and may come with specific conditions / requirements to activate them. These are the current types of skills:

A majority of the cards in the game have requirements or restrictions placed on their skills. Some skills even have more than one requirement to activate it. Below is a list explaining what each requirement / restriction is:

The following icons represent the (

Support Skills) , which only activate while that card is in the Support Zone.

Overall View of the Gameplay Area

You don’t have to copy this Gameplay Area completely, but it’s highly recommended you do as a general consensus because everyone will probably be using it. 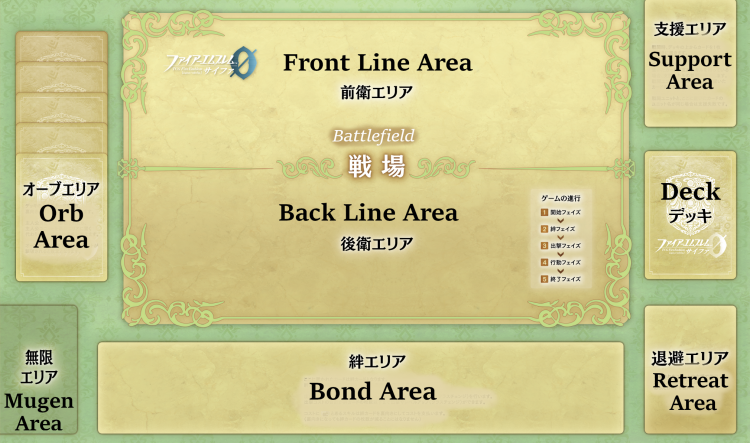 A player’s deck must contain at least 50 cards (The Main Character you set aside from your Deck is also included in this number), and there is no upper limit of cards you may have. Decks may contain no more than 4 copies of the same card, and there is no limitation on the amount of different units you can play, as long as there aren’t more than four cards with the exact same unit name and title (You can play up to four copies of the same unit as long as their titles do not match, e.g 4 copies of Marth, Crown Prince of Altea and 4 copies of Marth, Lodestar in your Deck).

The Phases of The Game

---Class Change / Level Up and Other Deployment Rules---

[In the example shown above, Alm (Cost 1) class changes to Alm (Cost 4/3) - Doing this only requires 3 Bonds instead of 4 for the turn, as it is a Class Change and not a normal deployment]

The Action Phase consists of using the skills of your units (depending on the requirement and type of skill that a unit has, a Skill could be used in any phase, not just the Action Phase), moving your units from the front line to the back line and vice versa and attacking your opposing player’s units with yours. The player who starts the game cannot declare an attack. 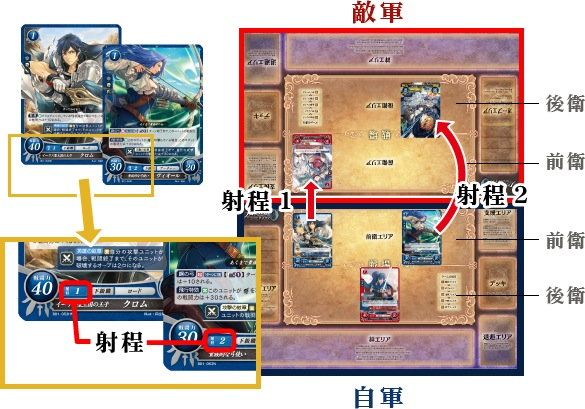 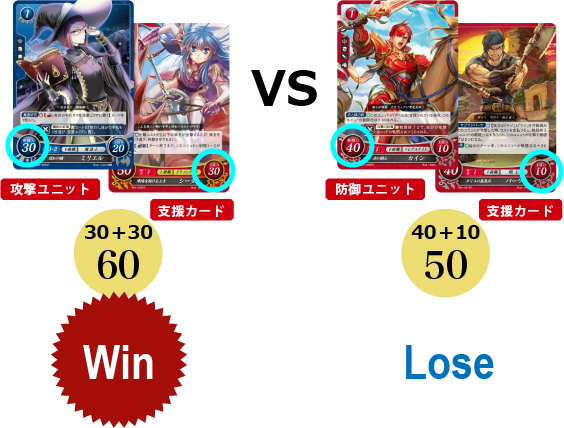 A “Forced March” occurs when a player does not have any units on the Front Line during their opponent's turn, where all of the player’s Back Line units are forced to move to the Front Line. This is NOT optional and must occur. It does not count as a 'move' so any skills which would normally activate do not.

If you are still nervous or iffy about the rules, perhaps it would be best to go and watch a few games on Lackey - you can find information on how to set it up here: [1]
You can also have someone explain the rules to you, and perhaps actually get into a game. Playing the game gives better and faster understand than just reading the rules.
If you have any further questions, such as something to do with card rulings or how to play the game you may ask them on forums or join us on Discord this link!


This page is constantly updating, so be aware of any changes that may happen. These rules were originally written by FutureKnightX and periodically updated by TheVinceKnight and Auroraskye.