Previous Page
This content was originally provided by King Marth 64. 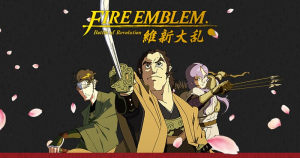 Fire Emblem: Battle of Revolution is an April Fools joke content that was added in the Japanese website of Echoes: Shadows of Valentia on April 1st, 2017. The website from the April Fools features the three playable characters, Valbar, Kamui, and Leon from Celica's route from Fire Emblem Gaiden and Echoes: Shadows of Valentia. The artwork that features Valbar and Kamui as a Samarui instead of a Knight and Mercenary and Leon is still kept as an Archer. And Marth has a free Bonus DLC that included a sketched artwork called "Runner Marth".