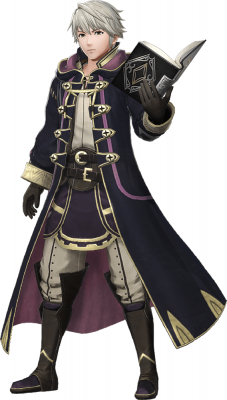 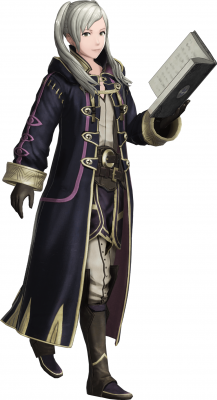 "A hero from the world of Fire Emblem Awakening and a tactician of the Halidom of Ylisse, Robin is a part of a force that fights against a hopeless destiny. After losing all memories of the past, Robin forged a strong bond with Chrom and established a reputation for being a coolheaded tactician in battle. Robin uses a tome to command a variety of magics, oftentimes dark, to attack enemies. Together with the Levin Sword, this tactician can turn the tide of battle."

As Robin attacks enemies, a meter underneath their portrait will fill. Depending on the amount charged, their strong attack will behave differently.

Robin casts Elfire, which damages enemies with a burst of flame on the ground. Robin will then cause the flame to grow, dealing more damage, launching enemies upward.

Robin casts Elwind, which causes wind blades to appear around Robin, hitting nearby enemies. They will then follow it up with a large horizontal wind blade that will travel in front of them.

Robin casts Thoron, but starts it by gathering electricity in one hand, hitting opponents in front of them. They will spin around, then fire it forwards, hitting many enemies in front of her in a straight line.

Robin casts Ruin, which creates a small dome structure on the ground, hitting enemies multiple times before Robin turns around and dispels the cast, scattering enemies.

Robin casts Rexaura, which causes beams of light to rain down, all around them, as they float into the air. The attack ends when a final larger beam of light rains down in front of Robin, knocking away all enemies, and creating a small crater that disappears.

Robin creates a sigil underneath them before pulling out their Levin Sword which they will slash at enemies with 3 times, sending them into the air. As enemies fall down, Robin throws the Levin Sword forward and it lodges itself into the ground while discharging electricity, hitting enemies several times as Robin charges up. After charging, Robin lets loose a lightning bolt that targets the Levin Sword, damaging the airborne enemies and scattering them.